LNOBT Honours Soloists of the Year 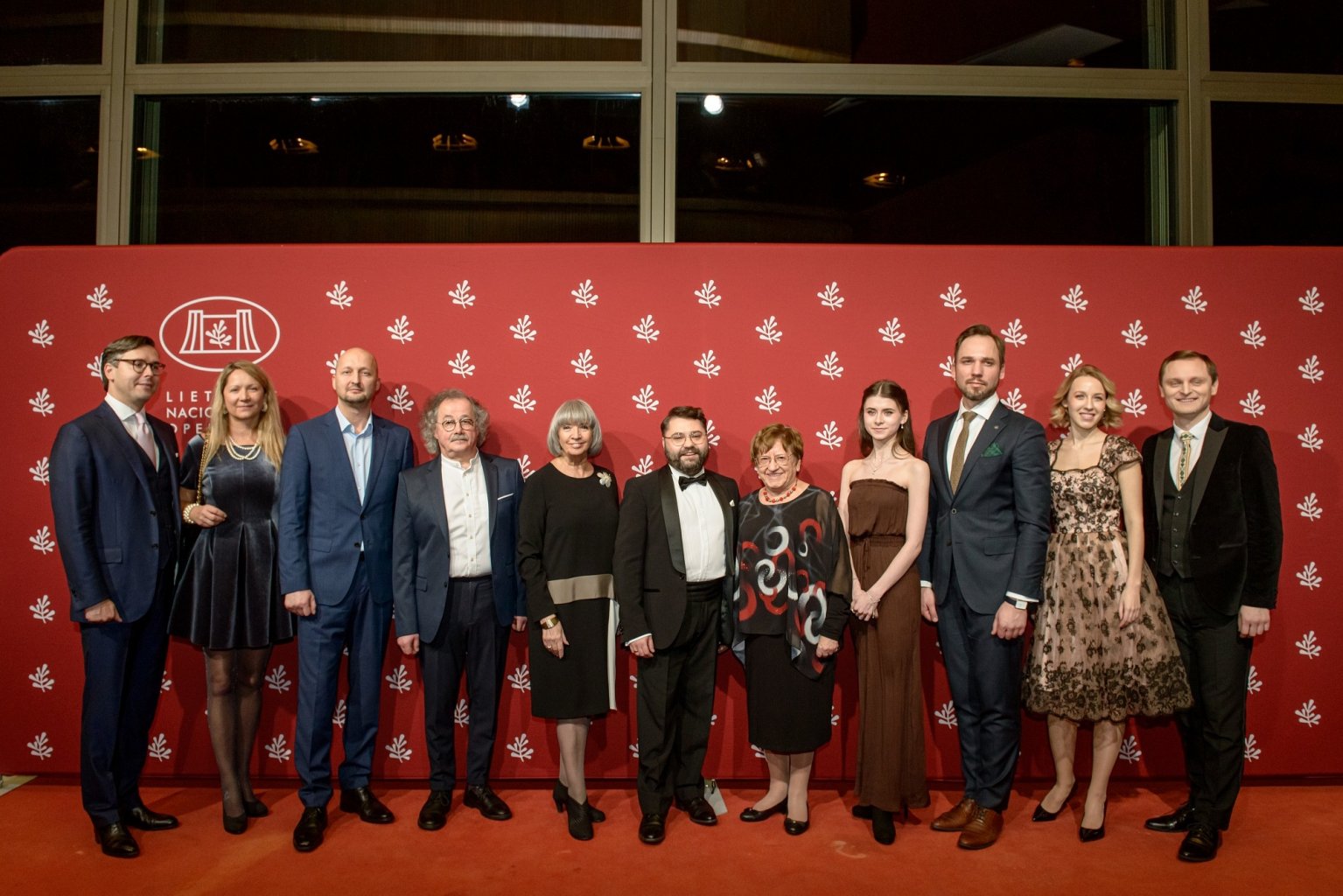 The Lithuanian National Opera and Ballet Theater awarded the soloists of the year - artists whose performances in 2019 were recognized as the best. A special Thanksgiving Award for many years of excellent service to the theatre and its audiences was also bestowed. All laureates were presented with letters of honour, prizes established by sponsors of the theatre, gifts from the “Laikrodžių centras” and decorative figurines created by the famous glass artist Remigijus Kriukas.

“Selecting those most worthy of an award from a large group of artists is a difficult but enjoyable task for the theatre and its heads of creative departments. The present Soloists of the Year Awards are special because we are introducing them in the middle of the 100th anniversary season of the LNOBT.  I wish all the laureates to continue delighting us with their performances on the stage of this theatre,” - said LNOBT’s general manager Jonas Sakalauskas during the opening of the ceremony.

The Opera Soloist of the Year was awarded to two singers, Rafailas Karpis and Liudas Mikalauskas, who performed brilliantly in Leonard Bernstein's operetta “Candide”. R. Karpis, who at the start of the premiere performance stepped onto the stage as Storyteller, was the first of the theatre artists to launch the 100th season of LNOBT.

“Moreover, last year I’ve participated in the production of G. Puccini’s opera “Turandot” directed by Robert Wilson – I would definitely call it the production of the decade. At the moment I am preparing for the premiere of S. Prokofiev’s “The Gambler”, in which I shall be singing the part of Prince Nilsky. The composer only gave 16 measures to this role, but the tessitura is so high that this small part suddenly turns into a lifetime challenge for any tenor,” – claims R. Karpis, who was bestowed the Opera Soloist of the Year prize by LNOBT’s sponsors Nerija Sabaliauskienė and Linas Sabaliauskas.

“I must confess: during each performance I’m still looking for colours that would enrich the characters that I’m playing in “Candide”. It is a long process: for instance, it was only last year that I finally felt who is Figaro from W. A. Mozart’s opera “Le nozze di Figaro”, and I’ve been singing this role for almost a decade. I like comic character roles, but at the same time I treasure Capellio in V. Bellini’s opera “Capuletti e i Montecchi”. And this spring we shall meet in the premiere of G. Donizetti’s opera “Anna Bolena”, in which I shall become King of England Henry VIII”, – promises L. Mikalauskas, who was given the Opera Soloist of the Year prize by entrepreneurs Danutė Budrikienė and Juozapas Budrikis.

This year's Ballet Soloist of the Year is Julija Stankevičiūtė, who took home the Ballet Hope Award just a year ago. "During this last year a lot was accomplished, danced, dreamed, learned, created... The most precious memories include the premiere of “Ballet Triptych”, and "Creative Impulse", during which I presented my first self-created dance miniature. Also, there were debuts in ballet “Cipollino” and “The Nutcracker”. I look forward to Spanish choreographer Lola de Avila's edition of “Giselle”. For me, it is one of the most beautiful classical ballets,” – says J. Stankevičiūtė, who was unable to attend the ceremony because she is currently assisting choreographer Martynas Rimeikis in creating a new performance at the Poznan Opera House. The prize for Ballet Soloist of the Year was established by Raminta Kuprevičienė, a long-time supporter of the LNOBT’s Ballet Company.

Recognized as the Opera Hope of the Year, Monika Pleškytė says that last year was the most intense in her stage career. She prepared roles in the the premieres of "Candide", "Forever and the Day" and “Gianni Shicchi”. The young soloist also made a very successful debut in W. A. Mozart's "Le nozze di Figaro". “Many of my previous roles were created in operettas. I feel that with my experience and emotions I am already maturing into the operatic repertoire and would like to move in that direction. Although the competition for sopranos is very high, I am not short of work: sometimes I rehearse in one Lithuanian city and in the evenings I sing in another,” – M. Pleškytė reveals.

British Ballerina Jade Longley, who is performing with the LNOBT’s Ballet Company for the second season, was voted Ballet Hope of the Year. The graduate of the English National Ballet School was looking for an attractive company and received offers from theatres in several countries, but after studying them more closely, she gave priority to Lithuania. “I liked the open, friendly atmosphere of your multicultural ballet company. Already in my first year, I had the opportunity to appear on the stage frequently, and for young ballerinas that alone is great success. I’m currently performing small roles in such ballets as "The Nutcracker", "Le corsaire", "La bayadere" and other ballet performances. In the future, I hope to play leading parts; my biggest dream is to dance Juliet and Giselle, ” – says Longley.

The “Orfėjo lyra” Foundation also established the Thanksgiving Award, which was given to LNOBT chief lighting designer Levas Kleinas, who has been faithfully serving the theatre for 40 years. During this period, Kleinas created lighting designs for more than 70 operas and more than 60 ballet productions on this stage. Together with theatre artists he has toured in Spain, Holland, Germany, USA, Japan, France, Italy, Greece, England, Egypt, China and other countries around the world. For his many years of excellent work, N. Galinienė, the director of the “Orfėjo lyra” Foundation, presented Kleinas with the Thanksgiving Prize.